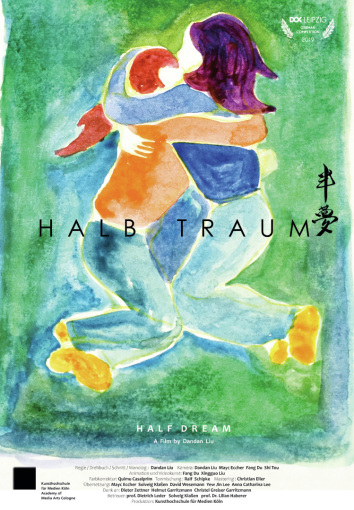 <Half Dream> is a personal documentary film about three Chinese former art students and their dream of creating art.

Ten years after their graduation from the Peking Art Academy the film maker goes to find three of her former class mates in order to confront them with their common past,

their creative urges to make art, and their current lives.The film portrays the one-child policy generation of the 1980s attempt to make their way through life amidst a society shaken from economic and social upheaval.

A film about dealing with social realities and the profound need for individual expression and creativity in a life from which art is slowly disappearing.

This documentary describes a woman who works in a bathhouse.The film observes the daily routine of a woman doing her rub off old skin in a private sauna in China.

I have known this woman with name "Mei" all my life and her life story hurts me.I try to alleviate my pain through this movie but hopefully also this woman's pain. I also admit that the wet working environment has aroused my interest. My goal has been to represent the hard and dirty work in the wet environment.

She is a helpful woman who deals with her clients as lovingly as she does with her own family. Ms. Mei has been rich in the past, despite her fate; she helps other people even though she herself has almost no money.When she was rich, his body was fine but her mentality was heavy Of course she misses the money from the past, but now she feels freer and happier Her mind and heart are finally fine again, even if her back and joints are getting worse.

I think Mrs. Mei's character is good, she is a strong person. I,m happy because she accepts her life as it is now. I feel relaxed and free now after the movie, because my great desire to make this film is realized.